What is multilayered interest representation?

Noncentral governments matter in international affairs. Based on this premise, my study explores how exactly noncentral actors, in this case U.S. federal states, make their voices heard on transatlantic trade matters and why some states become engaged and others do not. I employ the concept of multilayered interest representation to analyze states’ transatlantic ties.

My analysis offers a systematic overview of the means states have available to represent their interests on the Transatlantic Trade and Investment Partnership (TTIP) and how they use them. I differentiate between states’ transatlantic trade and investment promotion efforts (when they are concerned with economic development) and their transatlantic trade and investment policy efforts (when they are concerned with their regulatory authority).

About this blog This blog offers sections from my study to highlight some of the questions, topics and findings. I've edited the posts for the web, but all sources and figures can be accessed in the full study.

I argue that some states have actively inserted their interests into the TTIP talks and that this interest representation is largely motivated by a desire to protect state regulatory powers and not primarily by economic development issues. Previous studies on states in international matters have strongly emphasized economic development topics, such as promoting exports and attracting foreign direct investment (see the post on FDI data).

Why it's important to differentiate between trade promotion and trade policy​

While both topics, transatlantic trade promotion and transatlantic trade policy, are connected to the TTIP, each realm involves different actors with different goals and different activities. This study identifies and analyzes the various means of interest representation states use, in line with the first research question. In the realm of transatlantic trade promotion, the most often used means of interest representation are direct contacts between state executives and European businesses. This is a type of parallel interest representation and includes states opening offices in Europe or sending gubernatorial delegations to EU member states. Little conflict with the federal government arises here because states are free to seek out these trade and investment relations with no guidelines and little interference from the administration. Speaking out on the TTIP in a trade promotional context is usually a way for states to advance their economic development goals and has no political connotation. Such interest representation is largely led by the state executive. For example, governors from all regions of the U.S. frequently travel to Europe to entice businesses to settle in their states or to tout in-state exporters. In rare cases, governors or other officials from the state executive will connect their economic development goals to the TTIP’s potential to ease market access on both sides of the Atlantic. Their primary aim is thus not to sway the TTIP negotiations but to use the proposed deal as a mechanism for better trade and investment relations with the EU.

My argument, however, suggests that states voicing their interests on the TTIP are more concerned about safeguarding their regulatory authority within U.S. federalism against potential encroachment by TTIP provisions than about economic growth. While trade promotion efforts are still by far the most important part of states’ overall international engagement, the TTIP talks have provoked considerable activism for state sovereignty. States had already pushed this issue in the negotiations for the North American Free Trade Agreement in the 1990s (see the post on the NAFTA), but public and scholarly focus has nevertheless remained on economic development issues. For the contemporary, more wide-ranging and deeper TTIP discussions, my study therefore expands our view of states’ transatlantic trade relations by providing an in-depth analysis of why and with what means states assert their trade policy preferences. This is also where most state-federal conflicts occur (see, for example, the post on public procurement).

In my study, I consider states’ transatlantic activities under the umbrella of multilayered interest representation (see figure below). This term is deliberately close to the prevailing concept of paradiplomacy or multilayered diplomacy. But it avoids some of the terminological issues, namely the insinuation that states always act “beside” or “auxiliary to” the central government (“para”) and that they engage in diplomatic representative endeavors (“diplomacy”). 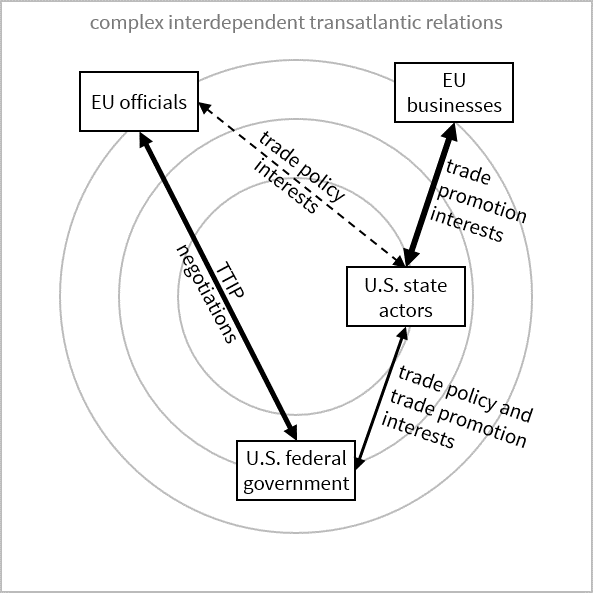 Interest representation on these topics can be understood as a process in which states feed their positions to the various actors engaged in transatlantic trade and investment relations.

In the figure, the thickness of the arrow represents the intensity of connections between the various actors. The thick arrow between states and European businesses indicates that almost all states link up with companies in the EU to promote exports and to attract FDI. 56.7 percent of respondents I talked to for my study said that trade promotion is the most important aspect of states’ transatlantic affairs, a sentiment also reflected in governors’ state of the state speeches: These addresses rarely featured trade policy topics but did touch upon international exports and investments. To promote trade, states use global economic development strategies, created and steered by the executive branch, which can include gubernatorial visits to European businesses and maintaining a representative office in the EU. Such interest representation might be facilitated by U.S. embassies or the Foreign Commercial Service in the EU. In addition, some state executives are actively connecting the TTIP to their economic development efforts, favoring the deal due to trade promotional considerations and speaking out towards the administration and Congress (symbolized by the arrow between the states and the federal government in the figure). Governors have written letters to the USTR, the president or members of Congress or they have sought informal contacts to federal actors to represent their trade promotion interests on the TTIP.

About the pictures on this site Through a one-year scholarship, I was fortunate enough to be a visiting researcher at Columbia University in the City of New York. While on campus, I took lots of pictures of the surroundings, some of which I decided to display on this site.

Despite some connections to the TTIP, transatlantic trade promotion is not generally linked to international trade negotiations. Governors seek out European business contacts independently of the EU-U.S. talks. Such contacts are the most common transatlantic connections U.S. states have and more prevalent than states’ linkages with governmental actors in the EU.

Only few respondents reported contacts to officials from regional, national or EU administrations, while almost 37 percent, mostly from states’ executives, mentioned business-related trade missions as a prime point of contact with the EU. These findings on the specific case of transatlantic trade relations confirm previous studies that, more generally, found states to be global economic actors prioritizing trade promotion as by far their most important international activity.

States’ engagement on transatlantic trade policy is different in scope and approach from transatlantic trade promotion. States do not connect with EU businesses to discuss trade policy, as those meetings are reserved for solely transactional matters concerning FDI and exports. Rather, the debate on transatlantic trade policy is dominated by the European Commission and the U.S. federal government, which lead the formal TTIP negotiations (represented by the thick arrow between the two in the figure), without involvement of the states. If states want to represent their interests on trade policy, they largely opt for intergovernmental options available to them. I discovered the following means for states to speak out within the U.S. federal system, in order of importance:

The IGPAC is the only institutionalized framework for state interest representation on trade policy. As an instance of coordinated interest representation, meaning that the states and the federal level engaged in a dialogue, the consultations in this body do grant states the chance to offer their voices on the administration’s handling of the TTIP negotiations. The IGPAC’s shortcomings, however, call into question whether this is a suitable avenue for states’ interest representation, which might explain why several state officials sought out additional ways to make their opinions known. Apart from the IGPAC, informal contacts to the federal level were the most important means for states to articulate TTIP policy interests. congressional testimony on the TTIP did not occur, so state officials relied on letters to and meetings with members of Congress as well as the administration to articulate their interests. 35 percent of respondents named letters as an important way to engage in transatlantic trade policy. The same percentage held that state associations can act as a conduit between states and federal and international actors. These organizations can facilitate meetings and host conferences, but most importantly, their policy resolutions are aggregated state interests that tend to carry more weight than single states’ opinions (a quarter of respondents mentioned such resolutions as part of their engagement on transatlantic trade topics).

Got questions or feedback?

If you have comments or questions, please feel free to get in touch via e-mail at (PGP-Key).

In addition, some state legislators reached out to their European counterparts, either at the national or EU level, but this type of direct engagement was rare (as the dotted arrow in the figure indicates). In a few personal encounters between state and EU legislators absent of any U.S. federal actors, the TTIP’s trade policy issues were the center of attention (see the post on states’ trade policy commissions). Still, there is neither an institutionalized mechanism of exchange (similar to the IGPAC) nor frequent, high-level visits with European policymakers (similar to gubernatorial trade missions).

Little activity but states do matter in transatlantic trade affairs

Altogether, the U.S. federal system is flexible enough to allow states to become engaged on transatlantic trade relations, a responsibility legally reserved to the federal government. Yet, only a few state officials used this flexibility to speak out on transatlantic trade policy issues, especially compared to transatlantic trade promotion interest representation, which has become commonplace among governors in recent decades. Most states did not develop or articulate either trade promotion or trade policy positions: U.S. states remained rather silent in the TTIP talks. The findings, while showing muted activity overall, nevertheless confirm that states do, in fact, matter in international affairs.